Home / Articles / Pet Health / Case Studies / Max, a one year old male Golden Retriever who developed a red sore rash around the back of his neck after a visit to a farm 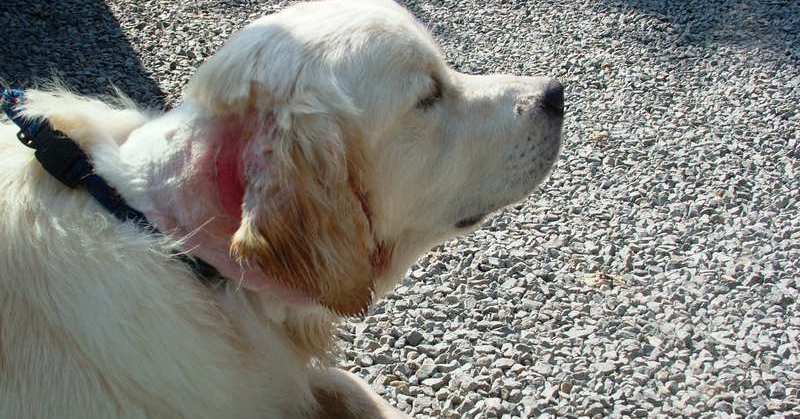 Max loves his visits to the countryside. The Roberts family have regular get-togethers on a family farm, and Max meets up with one of Jackie’s sister’s dogs. The two dogs are allowed to run in the fields around the farm house. They have a marvellous time, chasing each other through hedgerows, along ditches and around the wide open meadows. After a day on the farm, Max is always exhausted, and when he comes back to Dublin, he flops down in his basket into a deep, contented sleep.

A few weeks ago, after the usual day trip to the farm, Jackie noticed that Max was not as relaxed as usual on the car journey home. He seemed restless in the rear of the car, getting up, turning around, and lying down again. By the time she reached home, Max seemed even more agitated. He kept looking over his shoulder at himself, and sitting down, scratching his neck with his back leg. Perhaps he had got something stuck in one of his ears? Jackie phoned our clinic for an evening appointment.

By the time she brought Max in to see me two hours later, the problem had deteriorated dramatically. Max now had a huge, weeping sore, bigger than the palm of a man’s hand, behind his right ear. The fur had fallen off the affected area, and the skin was bright red and painful-looking. The surrounding hair was damp and matted with the oozing secretions which were seeping from the skin surface. Poor Max was very unhappy, The usual cheerful wag of the tail was gone, and he had his eyes half closed, looking into the distance as we talked about his problem.

Max was suffering from a skin condition that is often seen in warm weather, especially in thick-coated dogs like Golden Retrievers. It is known as “acute moist dermatitis”. Like most veterinary jargon, the name accurately describes the reaction, but does not give any clues as to the cause. ‘Acute’ means ‘rapid onset’. ‘Moist’ describes the oozing of secretions which cause the wet, seeping appearance. ‘Dermatitis’ simply means ‘inflammation of the skin’.

The instigating factor of this problem can be any substance which provokes an irritation. It can happen by a direct irritant effect (such as some chemicals), or by an allergic reaction (such as flea bites, or any environmental substance which can irritate the skin of sensitive animals).

The initial irritation is often very minor, and not usually noticed by the owner. However, it is enough to damage the ‘self-defence’ mechanisms of the skin. The normal bacteria which live on every animal’s skin are then able to penetrate the skin, and to multiply in the warm, superficial layers of the skin. They produce acids and other toxins as by-products of their multiplication. These substances cause further irritation of the skin which accounts for the rapid spread of the disease, from a tiny patch of sore skin to a massive, enlarged, reddened area. Dogs often go on to make the irritation even worse by scratching the itchy area, further damaging the red, sore skin.

Acute moist dermatitis usually responds very well to treatment. The fur is clipped away from around the affected patch, to allow it to cool down. Soothing, antibacterial ointment is applied to the painful skin. Antibiotics are given to kill the bacteria that are causing the problem. And the animal is prevented from continuing the self-trauma which is aggravating the problem, usually by being asked to wear a plastic “Elizabethan” collar.

Max’s skin was in such pain that I had to give him a short general anaesthetic to clean up the painful area. I also gave him a pain relieving injection. He was still groggy when he went home that evening, but I expected that he would be on the way to a full recovery by the following day.

In fact, Max did not improve as expected. The following day, the itchy skin seemed to be bothering him as much as ever. He was still deeply unhappy, and the skin still looked bright red and angry. There was something strange happening here.

I took a swab from the skin, and sent it off to the laboratory for culture. It seemed as if there must be some type of unusual infection going on, perhaps resistant to the usual drugs. I changed Max’s medication onto a different combination of antibiotics, and sent Max home for the weekend.

When he came back in on the Monday morning, he was like a different dog. The redness and heat had vanished from the sore skin, and he was no longer trying to scratch at himself. The swab result came in, and it confirmed what had been going on. Somehow Max had picked up a combination of two disease-causing bacteria which showed an unusual pattern of resistance to the standard antibiotics. This explained why he had not initially responded to treatment. Fortunately, both of the bacteria were sensitive to the antibiotics which had been started on the second day, and so it was not surprising that he had started to improve at that point.

Max made a complete recovery within a week. We will never know exactly what initiated the problem. Max must have pushed  his head into something irritant. Was it some type of plant? The mystery remains, but  hopefully, it was a one off incident. One episode of acute moist dermatitis is more than enough. 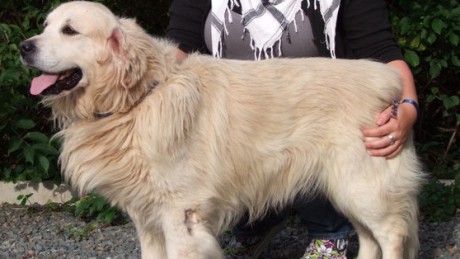